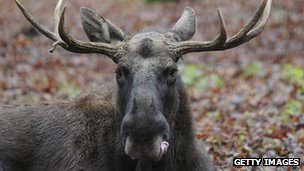 Ikea has confirmed it has withdrawn nearly 18,000 of its elk meat lasagnes from sale in Europe after they were found to contain pork.

The Swedish furniture giant said sales were stopped in late March, and tests confirmed the contamination on Friday.

Ikea said the pork had no health risks, but that it did not « tolerate any other ingredients than the ones stipulated in our recipes or specifications ».

It is the latest in a series of meat contamination scandals across Europe.

Ikea was among several companies whose meat products were found to contain horsemeat. Earlier this year it withdrew its meatballs from sale in its restaurants and grocery departments.

The European elk is known in north America as a moose.

In a statement, the company said sales of the elk lasagne were suspended last month after Belgian authorities detected pork in them.

Further tests were carried out, and Ikea confirmed that one batch of the lasagne made by the suppliers Familjen Dafgard, with an expiry date in January 2014, contained 1.4% pork.

A total of 17,600 lasagnes have been removed from the shelves.

Swedish newspaper the Local quoted the meat suppliers as saying the contamination was due to its facilities not being cleaned properly between the handling of different animals and that it was taking steps to improve its practices.

« Together with our supplier, we have implemented improvements to ensure that our products should not contain any other ingredients than those declared on the packages, » said the Ikea statement.

« Ikea is committed to serving and selling high-quality food that is safe, healthy and produced with care for the environment and the people who produce it. »