With memories of the global horse meat scandal finally fading, consumers in China are being served with a fresh round of controversy at the deli – this one involving rat meat being passed off as mutton, among other deceptions.

Chinese officials arrested 904 people who allegedly sold adulterated and mislabeled meat products, according to a report from the country’s official Xinhua News Agency. The arrests came after a three-month crackdown in which police uncovered 382 meat-related offenses and seized more than 20,000 tonnes of illegal goods, Xinhua said. 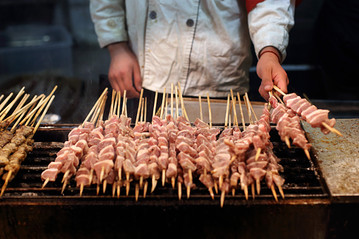 Bloomberg News
Street-side skewers being sold in Beijing. Is it mutton? Or mink? Or rat? Or…

Offenses included producing water-injected meat and treating rat, mink and fox meat with chemicals in order to pass them off as beef and mutton, the report said.

The authorities’ newest beef with meat producers’ bait-and-switch comes as China’s food safety regulators renew efforts to clean up a sector that has for years been mired in scandal. The country’s leaders are aiming to create more trust of homegrown companies and boost consumer spending.

In February news of horse meat turning up in European-sourced beef products, including IKEA meatballs, shocked the globe, but such incidents have become commonplace in Chinese society, where many are willing to sell fake goods to turn a higher profit. Indeed, in a sign of how little faith Chinese consumers have in domestic products, IKEA came under fire after it told local customers that its meatballs in China were horse-free because they were produced in coastal Fujian province.

Chinese eaters have grown increasingly wary of meat sold at cheap prices on the street, particularly as cast-off mink and fox carcasses are becoming more available with the rise of China’s fur industry.

An initial investigation leading up to the arrest of the meat violators revealed that one group of suspects profited 4 million yuan, or $650,000, since July 2011 by processing chicken claws using a hydrogen peroxide solution, Xinhua said. Hydrogen peroxide, an oxidizer used in the bleaching of human hair and paper as well as in the treatment of wastewater, can make chicken feet look whiter. The chemical was previously been discovered in a chicken-foot processing operation in Zhejiang province in 2011. 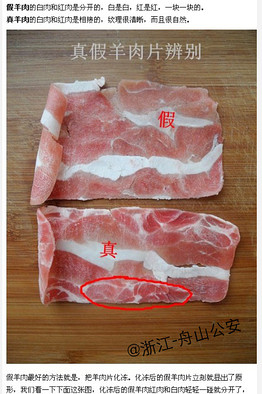 Sina Weibo
A screenshot shows an illustrated guide, posted on Sina Weibo by police in Zhejiang, that tells consumers how to distinguish between fake mutton (above) and the real stuff (below). In the real mutton, the fat is more evenly distributed.

One case in the crackdown centered in China’s eastern city of Wuxi, where suspects pocketed 10 million yuan by selling fake rat- and mink-mutton the report said.

In response to the latest scandal, police in Zhejiang posted an illustrated guide to spotting fake mutton on the Twitter-like microblogging site Sina Weibo. “All those times I went to get hotpot, turns out most of the time what I was eating was rat meat,” responded one microblogger, who added an animated vomiting emoticon to punctuate the point.

Xinhua said police are now turning their efforts to the dairy industry, which has been under close watch since 2008, when the industrial chemical melamine was used to adulterate milk and resulted in the death of six infants and illnesses in 300,000 others.