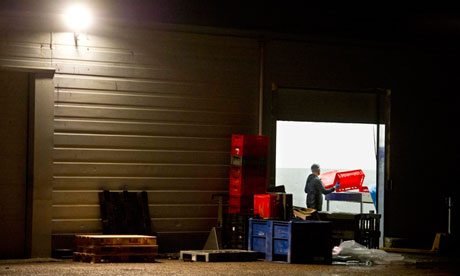 A British slaughterhouse that was shut down two weeks ago has been linked for the first time to the Dutch distributors currently being investigated as part of the alleged multimillion-euro meat fraud.

The Guardian has seen documentary evidence of lorry movements from the Red Lion slaughterhouse in Cheshire, which was ordered to halt operations by the UK authorities last week, to Willy Selten’s meat processing companies in Oss, in the Netherlands.

It is potentially the first established link between the two companies that are part of the authorities’ international inquiries into the horsemeat scandal.

Presented with the documentary evidence of lorry movements collected by the animal welfare group Hillside Sanctuary, the Red Lion abattoir confirmed that it had delivered several consignments of horse to Oss in 2012.

John Young, spokesman for the Turner family who own Red Lion, insisted their horse deliveries had been properly labelled and were legal, although he admitted that one horse had been the subject of a recall having tested positive for bute, the horse drug banned from the food chain.

The Dutch company, owned by Selten, has been ordered to recall 50,000 tonnes of meat he has sold to 502 companies around Europe over the last two years, following a raid by the Dutch authorities. The Netherlands Food Safety Authority (NVWA) is investigating whether the firm mixed beef and horse and passed it off as beef. Selten has admitted he mixed horse with beef but says it was only to specific order. Selten lost an appeal in court last week to have the order recalling over €100m of meat products rescinded.

Customers of the huge volume of potentially adulterated meat include eight companies in the UK who are thought to have sold to factories supplying UK supermarkets. Neither the Dutch nor the UK Food Safety Authorities would name them this week, however. The Turner family businesses are also being investigated by the food watchdog: three of their Polish slaughtermen have had their licences revoked for alleged abuse of horses during killing.

Enforcement authorities across Europe are trying to establish at which points in the long, complex chain of global meat suppliers to retailers and caterers the widespread adulteration of beef products with horse occurred. The link between the Cheshire trader and the Netherlands could put another piece of the jigsaw in place.

By searching through documentary evidence of lorry movements collected by the animal welfare group Hillside Sanctuary, the Guardian was able to follow horsemeat from the Red Lion abattoir, trading as High Peak Meat Exports (HPME), through Harwich to Willy Selten’s address in the Netherlands.

HPME said all the consignment documents relating to Selten transactions had now been handed over to the Food Standards Agency and that they showed a fully traceable, legitimate trade. It is claiming £60,000 it is owed by the Dutch company.

The Red Lion abattoir was told by the FSA to cease slaughtering horses two weeks ago. The agency said it had withdrawn approval because the plant’s infrastructure did not meet regulations and not because of the horsemeat scandal.

The Guardian has learned that the closure comes after a series of warnings to the abattoir. The FSA has twice previously withdrawn its inspection service recently – it is not legal to slaughter without it – allegedly because of threatening behaviour by the Turners towards its staff. The Turners denied that there had ever been any threatening behaviour.