Banned low quality meat stripped from the bones of slaughtered animals is being sold to the UK’s sausage makers using a loophole in the law, it emerged today.

The scraps, known as mechanically separated meat (MSM), are given names like ‘3mm mince’ so it can avoid an EU ban and is ending up in British food, experts say.

A year ago Brussels told the Government that MSM could no longer be categorised as meat in all EU member countries and if used it had to be listed separately on the label.

But in the latest twist in the food labelling scandal gripping the country it appears the ‘leftovers’ are being widely re-branded and then sold to British producers as meat. 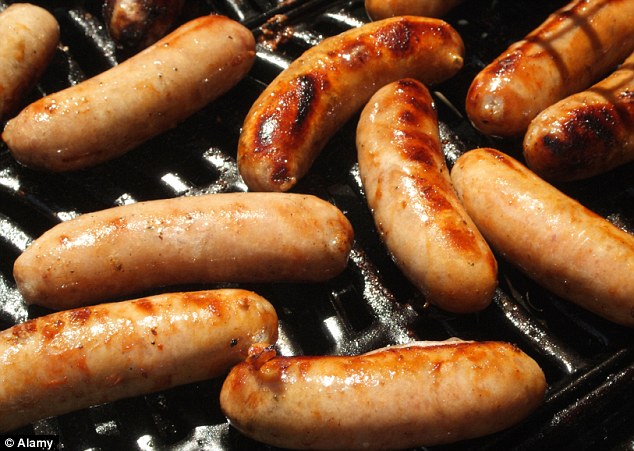 Scandal: banned cheap cuts scraped from the bones of slaughtered animals is being sold into Britain under various names, especially in teh sausage industry, it emerged today

The controversial product was used widely in beef burgers and ready meals.

Experts say the ban means that MSM was probably replaced with horse meat by producers bent on cutting costs, who then put it in lasagnes and burgers being sold in UK supermarkets.

Today one of the UK’s biggest sausage makers admitted they are using ‘3mm mince’ and traders say it is being sold into the UK by European slaughterhouses under various names.

It is also known as Baader meat, named after a company in Germany that produces a meat mincing machine that can strip membrane and sinew from bones, but claims ‘it is meat!’.

They have sold 5500 of their machines tp food producers in more than 100 countries.

The system uses a ‘squeezing belt that feeds the product to a perforated drum and presses the soft components through the holes of the drum. The solid components remain outside the drum,’ their website says.

Emails seen by the BBC show that companies across Europe are trying to sell this product in Britain.

One pork supplier from Germany said: ‘My information is that you only have to declare MSM, and Baader no.’

One chicken suppler said: ‘Declarable MSM is derived from chickens with all the meat and skin in its original format and minced via the Baader machine, all the bones are separated mechanically. This format can be declared as meat in the ingredients.’ 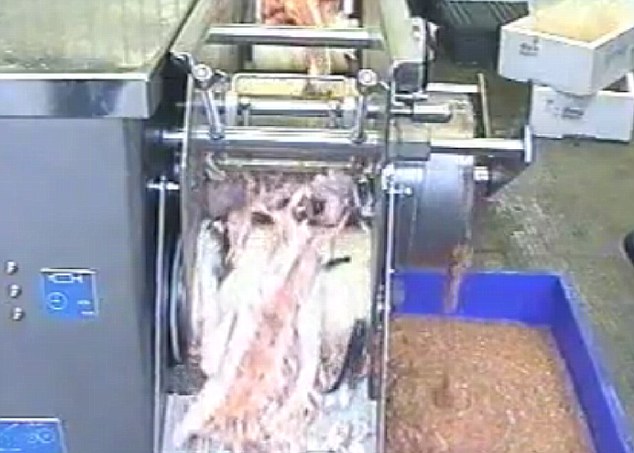 Controversial: This version of a ‘Baader machine’ strips meat from animal and fish bones and produces a fine mince that spills out of the side

The ‘desinewed’ meat at the centre of the row is made from any flesh left on bones after slaughtering removed by spraying it with low-pressure water.

It was introduced into the UK in the 1990s and the end product is similar to a very fine mince.

Another more high pressure technique, which produces a meat ‘slurry’ or paste, was also used to  bulk-out burgers, sausages and pies in Britain until April 2012, when the labelling law and ban was brought in.

The EU treat both processes the same, but it appears it may still be hidden inside cheap foods and not labelled as required legally.

Minced beef and lamb produced this way were banned completely over fears it could spread BSE, but not pork, chicken and other meats.

‘Well we buy and sell it, we’re not responsible for the end labelling and what goes on meat contents and things like that,’ he said when asked by the BBC if it is being put in food secretly. 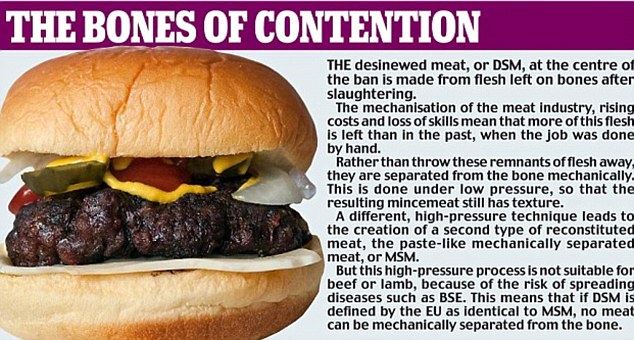 The UK’s biggest private frozen sausage company, Freshlink Foods, said in a statement: ‘Some Baader meat is used in our own branded product that goes into the foodservice market. Where used, this is clearly declared’.

Northern Irish sausage maker Kevin McWhinney has been campaigning against these meats for years.

The UK should not be using this Baader meat but as far as I am aware it is coming into the country and is being used,’ he said.

A spokesman for the Food Standards Agency told MailOnline: ‘Knowing that a product is « Baader meat » is not enough to decide whether it is legal or illegal.

Baader meat is a generic term used to describe the product of a mechanical separation process using a Baader machine. This product can fall into various categories under EU food law, depending on the raw material used, so can be used legally by food businesses in certain circumstances.’ 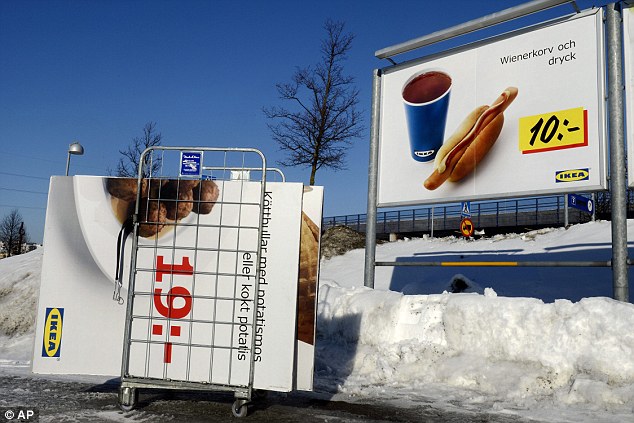 Discovery: A billboard showing a hot dog is seen in a parking at the Ikea store in Stockholm as the furniture giant announced it was withdrawing wiener sausages in the UK after tests found ‘indications’ of horse meat

Furniture giant Ikea yesterday said it is withdrawing wiener sausages in the UK after tests found ‘indications’ of horse meat just days after it withdrew a batch of its traditional meatballs.

The announcement came hours after the boss of Tesco was forced to admit he still could not guarantee that all of his products contain exactly what is on the label as he fought to reassure the public over the scandal.

Ikea said it was removing its sausages from sale in Britain, France, Spain, Ireland and Portugal after tests confirmed ‘a few indications of horse meat’.

A spokeswoman said: ‘Based on some hundred test results that we have received so far, there are a few indications of horse meat.

‘Together with the Swedish supplier in question we have decided to withdraw from sales also the wiener sausages … from that supplier.’ 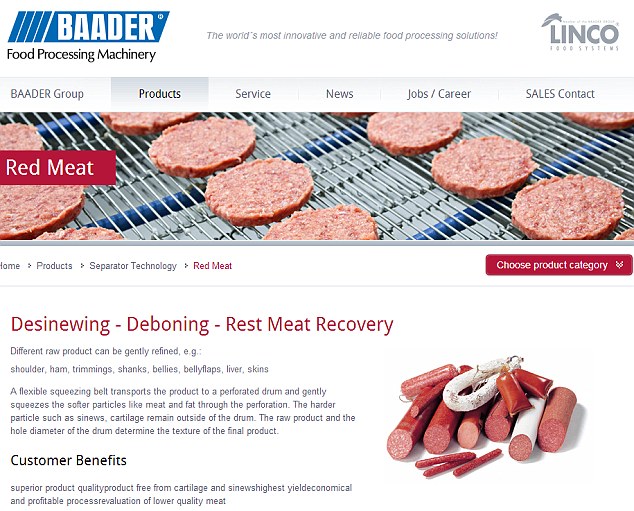